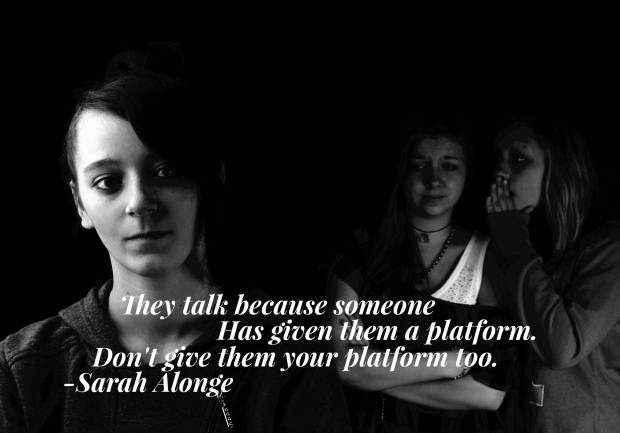 One of the greatest and most troubling things about life is that everyone has the right to an opinion.

If my friend came out wearing an outfit that was not to my standard, I have the right to express my honest opinion that her outfit is whack! Of course this ‘right’ of mine, won’t change the fact that she A) thought it was ok to wear the outfit and  B) has already stepped out of her house with the outfit on.

Instead what my ‘right’ could have done is made her feel uncomfortable in a situation that she may not be able to change. She is in that outfit and everywhere we go she’ll be wondering who else things her outfit is Whack. On the flip side, she could take it on the chin and confidently rock that outfit and its 14 colours with absolute pride! Now let’s be honest which one do you think is most likely to occur?

Recently I have been receiving some great feedback from the blogs. But of course there are always a few who know little but seem to want to share a lot. I call them the stakeholders with no stake. The people who’ve invested little to nothing in my life but by some fascinating conclusion they believe they have the right to share thier opinion not just about my blogs but about my relationship. See I don’t want this to come across bitter. Instead I want you to receive my gratitude.

For a while I was girl 1. The one who was uncomfortable each time I put out a post. I lived in anticipation of the next comment that I couldn’t publish on the site asking me ‘why did you let it go do far’ or the messages on snap or insta DM. I lived that girl so much that I didn’t appreciate the positives. You know anytime you are doing anything that shows the mercy of God, it frustrates the enemy so much that he will do anything to stop you. My blogs were created not only as a lifestyle blog but to show the healing process of God in my life. After having such an public relationship it was easier for me to hide away and have memes created about my type. You know the one who flaunts her boyfriend all over social media then deletes all the ou hires and never says a word after they break up. (By the way I see nothing wrong with being silent after a break up) but I chose not to because I beleive in the power of healing through testimonies and I wanted to share mine.

Even with knowing why I was doing it, the unconstructive opinions of people carried greater weight than I should have allowed. But I thank you because the greater the weight, the harder it was to lift it. But I lifted it. You gave me muscles to flex. I’m now girl 2! I rock my 14 colours with pride. It’s what I call being unapologetically me.

I am not saying it’s easy to ignore the comments. But what I will say is when you focus on the calling it makes it so much easier. People WILL talk. They will stare, they will judge. I can’t change that. If that has happened to you, you can’t change that either. But you can change your response. So choose to be girl 2.

9 thoughts on “People will talk… let them ”